Are you looking for poems to include in a eulogy, or to read aloud as part of a funeral service?

Here are four poems that are frequently used. I've made audio recordings of them to give you an indication of how to say them aloud.*

You'll find the text, an audio clip, and a little about the ideas expressed in each poem, below.

If you like, and want to use, them, there's a free printable of all four you can download at the foot of the page.

*There's more detailed information about how to read poetry out loud, if you want it.

I Am Standing Upon the Seashore

The principal idea expressed in this poem is that the essential being of a person, (what makes them unique), does not die. What actually happens is that their soul (characterized as a beautiful and strong ship) sails on to be joyfully welcomed by those who have gone before.

We, the living, may not see the person anymore but that does not mean they have ceased to exist. Instead they have 'crossed over' into the afterlife or heaven.

For another interpretation, read this article by Juniper Quin: Perfect funeral poem explores the meaning of loss and memory. 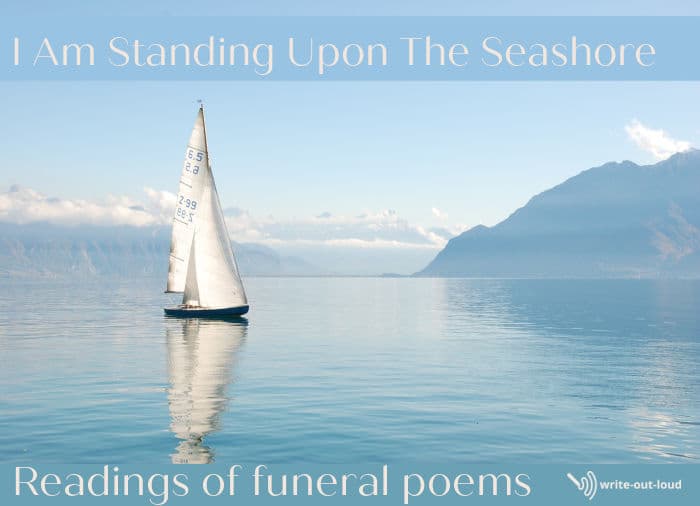 I am standing upon the seashore.
A ship at my side spreads her white
sails to the morning breeze and starts
for the blue ocean.

She is an object of beauty and strength.

I stand and watch her until at length
she hangs like a speck of white cloud
just where the sea and sky come
to mingle with each other.

Then, someone at my side says;
"There, she is gone!"

"Gone where?"
Gone from my sight. That is all.
She is just as large in mast and hull
and spar as she was when she left my side
and she is just as able to bear her
load of living freight to her destined port.
Her diminished size is in me, not in her.

And just at the moment when someone
at my side says, "There, she is gone!"
There are other eyes watching her coming,
and other voices ready to take up the glad shout;
"Here she comes!"
And that is dying.

Do Not Stand at My Grave and Weep 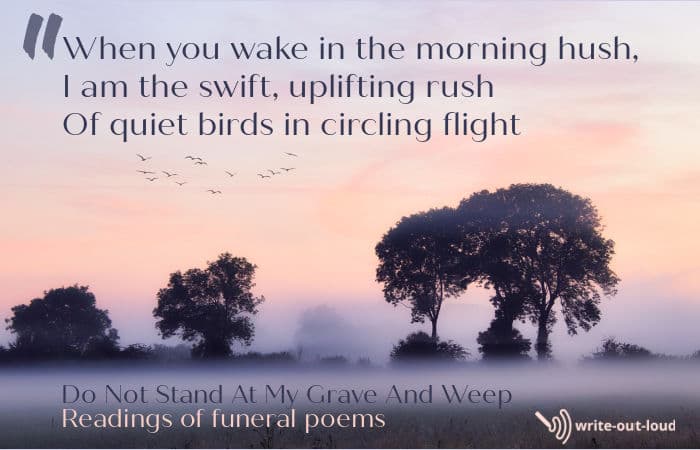 Do not stand at my grave and weep,
I am not there, I do not sleep.

I am a thousand winds that blow.
I am the diamond glint on snow.
I am the sunlight on ripened grain.
I am the gentle autumn rain.

When you wake in the morning hush,
I am the swift, uplifting rush
Of quiet birds in circling flight.
I am the soft starlight at night.

Interpreting Do Not Stand at My Grave and Weep

The poem takes on the voice of a person who has recently died. It is as if they are speaking directly to someone who loved them dearly and is grieving.

The essential message is, I am not dead. There is no need for you to come and stand by my grave and cry. I do not live there.

Instead look to the beauty of nature, the seasons - the cycle of life. I am there and vibrantly alive: an integral part of the ebb and flow of the natural world.

History of the poem

The poem has an intriguing history. Who actually wrote it? Who for? And why was it never copyrighted?

For many years Mary Frye's authorship was questioned. After all, how could a Baltimore housewife, without a formal education, write one of the most popular poems in the English speaking world? One that is used in funeral services or on bereavement cards regardless of religion, race or social status?

That she is the author of the poem was confirmed in 1998 after investigative research by Abigail Van Buren, the newspaper columnist better known as "Dear Abby." 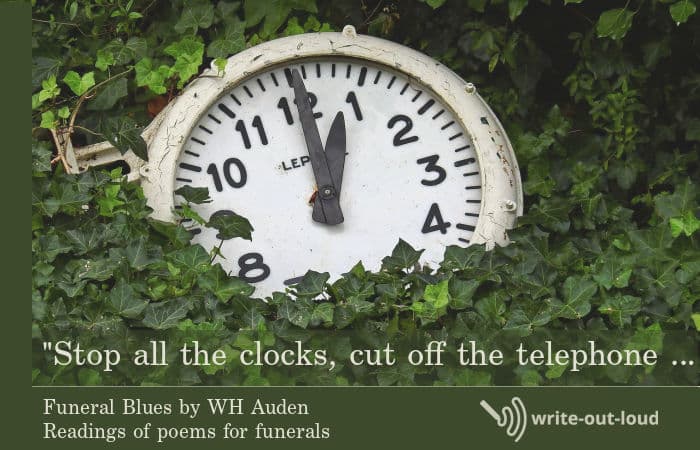 Stop all the clocks, cut off the telephone,
Prevent the dog from barking with a juicy bone,
Silence the pianos and with muffled drum
Bring out the coffin, let the mourners come.

He was my North, my South, my East and West.
My working week and my Sunday rest,
My noon, my midnight, my talk, my song;
I thought that love would last forever; I was wrong.

The stars are not wanted now: put out every one;
Pack up the moon and dismantle the sun;
Pour away the ocean and sweep up the wood;
For nothing now can ever come to any good.

The poem addresses the overwhelming enormity of the death of loved one. How can anything, or anyone, possibly go on? The world, and everything in it, should immediately stop or at  least, go into mourning.

To someone who hasn't experienced the death of a person very close to them, the poem might read as total hyperbole, a dramatic exaggeration. However it's true. In the midst of grappling with loss it seems extraordinarily callous and cruel that the ordinary world keeps on going. Business as usual.

The stars shine. The waves roll in. The earth turns. What for? Why? To the bereaved person it makes no sense at all.

Prayer of Saint Francis of Assisi 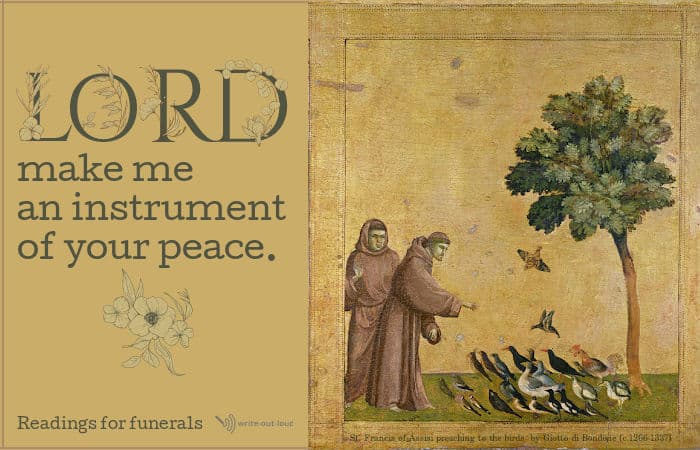 O Divine Master,
grant that I may not so much seek to be consoled as to console;
to be understood as to understand;
to be loved as to love.

The prayer is about the puzzling paradox at the heart of being human: that when we cease to regard ourselves - our feelings, our hurts, our triumphs,  the things we have or do, as of primary importance, and look instead to improving the lot of others, we find what we are looking for.

Therefore if we want, for example, forgiveness, understanding, or consolation for ourselves, then we also need to extend that to others. Even during times of deepest, darkest grief.

This prayer inspires and sustains millions of people all over the world. You can find out more about its interesting background here: The origin of the peace prayer of Saint Francis.

Get the printable of these four poems

If you've arrived here looking for suitable material for a funeral speech or eulogy, here's a large selection of carefully chosen inspirational quotations.

There's several pages of funeral poems and readings as well as sample eulogies to read too.

And just in case you want it, help on how to read a poem aloud.